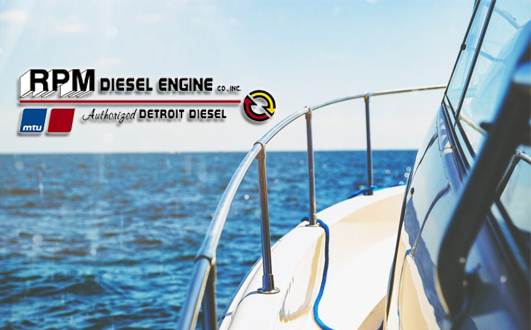 Finding a reliable authorized Detroit Diesel marine mechanic in Fort Lauderdale to perform routine engine maintenance regularly is the primary way to make certain your diesel engine doesn’t fail you while out to sea. However, there are still many unpredictable instances that can contribute to poor performance and unfortunate diesel engine breakdowns. Understanding how to diagnose and troubleshoot these common marine diesel engine problems is a useful resource to learn for every ship operator.

Whenever a diesel engine failure happens, it is more often than not because of an interruption to one of the engine’s processes. Locating where the interruption took place and fixing the issue can often cause the engine to begin working again, if only temporarily. Of course, in the event it doesn’t, it’s best to find an expert Detroit Diesel marine mechanic for assistance.

Below are some of these common problems marine engine owners encounter, what to look for to find them, and useful tips to fix the problem.

Generally, you’ll be notified of any problems caused by oil by the warning light. However, there are also occasional symptoms that could accompany the issue. For instance, it’s common to see plumes of white or gray smoke or hear strange mechanical noises coming from the engine. These symptoms may or may not result in an engine failure. Regardless, you should take them seriously and turn the engine off right away.

The most common issue will be caused by low oil levels. Refilling the oil and checking the level with the dipstick should result in the engine operating once again. Another possible reason is a clogged oil filter. In that case, change the oil filter and any switch any remaining oil out with a fresh supply. If neither of these scenarios works, find a Detroit Diesel marine mechanic to schedule an appointment.

Many marine engines are cooled by water intake to prevent them from catching fire. The mixture of hot salt water and fuel expelled from the vessel is often highly corrosive. It can also cause the engine’s temperature to be too low to operate if it works too well. In addition, some complex diesel marine engines use fresh water and antifreeze in their cooling system instead.

If the overheat gauge is signaling problems or steam is coming from the engine, it could be a sign the water isn’t at optimum cooling levels. This could also cause the engine to begin running strangely or stop altogether. This can sometimes be fixed by checking if the pressure belt powering the water pump needs replacing. Belt replacement is best handled by an authorized Detroit Diesel marine mechanic.

Another possibility is there is a blockage or clogging in the sea strainer. Try removing the strainer after shutting the seacock and then rinse it out thoroughly before replacing it and restoring the system. If that doesn’t work, the most likely probably is a broken water pump.  Lastly, coolant levels should be checked along with thermostat accuracy. In any case, it’s recommended to have an experienced Detroit Diesel marine mechanic handle these diesel repairs to ensure no further damage is done to your engine.

Air flow is critical to engine performance and any restrictions can quickly lead to marine engine failures. A loss of power, irregularities in how the engine is running, or visible black smoke are all symptoms of obstructions with air flow. The first thing to inspect will be the air filter. Paper air filters will need replacing while metal or wire filters are generally able to be reused once cleaned.

If the air filter is not the culprit, there is most likely a clog within the ventilation. Damaged piping and clogged vents could be limiting airflow and should be repaired. Should this be the case, schedule an appointment with your local Detroit Diesel marine mechanic soon to keep the problem from worsening.

RPM Diesel is the leading marine diesel engine service center in Fort Lauderdale. Our certified technicians are highly knowledgeable in all aspects of diesel services and more than capable of assisting you with any repairs you might need. If you’re looking for a Detroit Diesel marine mechanic in Fort Lauderdale, contact us to schedule a service appointment soon.