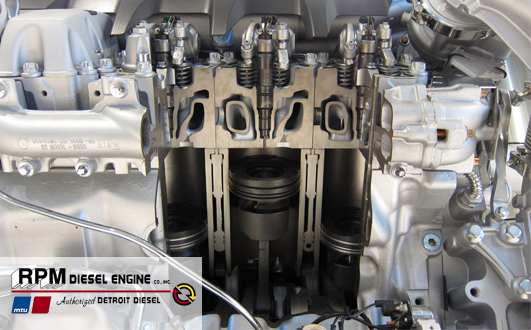 The fuel is pressurized, ensuring that it properly breaks down and directs the fuel while assisting it in mixing with the air. The common rail injection system drastically reduces harmful engine emissions and engine noise.

Differences in Fuel Injection and Pressure

In a common rail injection system, a single tube is used that is divided into a fuel injector valve. This valve is controlled by an internal computer and is composed of a precision designed nozzle and plunger that is fully driven by a solenoid valve.

The onboard computer assists in regulating the fuel pressure and how much fuel is injected into the engine. In a traditional engine system, the high-pressure fuel pump stores fuel at 2900 PSI.

The computer monitors the time it takes to inject fuel and increases the pressure of the injected fuel. By increasing the pressure, the common rail injection system improves the rate of combustion and fuel atomization.

Adoption of the common rail fuel injection system has become increasingly popular with vehicle owners for the number of benefits the system provides. By improving combustion and atomization, this next-generation system helps to lower emission levels, improve fuel consumption, and increase fuel efficiency.

Conventional engines can not compete with the twenty-five percent more power and torque that a common rail injection fuel system provides. Although an engine that uses the common rail system is slightly more expensive than a conventional engine, the benefits far outweigh the cost.

It is important to routinely service the common rail injection in Fort Lauderdale to ensure it continues to operate at peak performance. Only trained engine technicians should be consulted since they have the training, experience, and tools to properly examine and perform diesel fuel injection service.

RPM Diesel Company has a team of trained and experienced mechanical technicians that can maintain and repair your common rail injection system. With decades of experience, you can depend on us to keep your engine performing optimally for years to come. Contact us today or visit our facility.