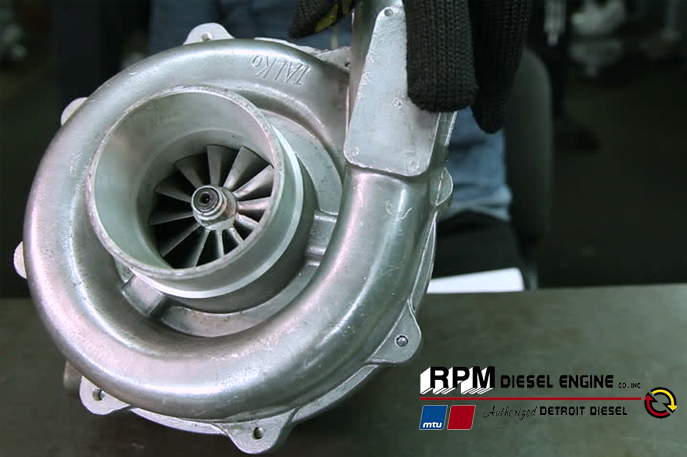 A Turbocharger is an incredibly efficient way of producing substantially more power for your diesel engine. At RPM diesel we offer many services to install these devices. It helps first to understand though what a turbocharger is and how it works. Turbos fall under a category of engine components designed to provide additional power to a motor via a process called ‘Forced Induction”. Forced induction is accomplished by pushing larger amounts of highly pressurized air into the engine than would normally be the case via a standard, or naturally aspirated, air intake system. There are two commonly used Forced induction components- Turbos and Superchargers. A Turbo works by spooling up off of the power of the engine system’s exhaust gasses. Turbos tend to be more efficient than their supercharger counterparts, which are not powered by exhaust gasses but are mechanically driven by belts in the vehicle.

At RPM Diesel we carry, install, and maintain turbocharger systems from and for a variety of major worldwide known brands. This includes Borg Warner, Garrett, Cummins, Hoslet, IHI, KKK, Mitsubishi, and Schwitzer. If your engine system is already equipped with a turbo, we can offer upgrades from the stock Turbo. We can also give you a quote on what it would cost for parts and labor to install and tune your engine to work with a turbo. Because of the additional power involved, and components its good to know how and what to maintain and how often.

Turbos require a steady supply of clean, filtered oil as they spin at incredibly high RPMs. This causes them to generate substantial amounts of heat, to which a good well functioning cooling and oil system must be properly maintained. Additionally making sure there are solid air pathways with no leaks will keep the turbocharger from overworking itself to compensate for pressure loss. RPM diesel are experts on maintaining the Turbo system in your diesel engine. Here are some of the benefits of installing a turbocharger:

Turbos and Forced induction installations and maintenance are complex systems that should be approached by trained, licensed professionals. RPM diesel has had our hands in Diesel engine systems since 1956 and is the number one  Diesel and turbo shop in south Florida. For more information on what we can do to boost the efficiency of your diesel engine with a  turbo, give us a call today at 800-660-6304.